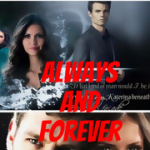 My name is Avery R. Harding (or Saiyuki "Yuki" for short from my account name)--this is what I would like to call my pen name. Due to what I study, I'm not big on having my real name attached to anything, unless it would be my official social media account (which I know I can easily lock down). As much as I love my fandom building, and my fan fiction writing, it is also a side of me I only reveal to my close friends, family, and significant others.

My overall time is spent trying to think of ways to build my Fan Fiction, build the world, while also working in the The Vampire Diaries, The Originals and Legacies Fandom into my works. I love changing the characters, making something new with his or her history, trying to evolve it and see what more I can do. As much as I love the show and the spinoff's, there are certain plotlines I wish had played out differently--with numerous, different characters and options; relationships and challenges; even with the supernatural character (though Legacies has been a huge improvement in that area).

Anyways, my goal in being part of this community is to be welcome to all and to develop friends. If you ever need help, send me a message on my wall--maybe we can work it out together. And if I don't get it myself, then we can learn it together as well :). I have enjoyed being part of this wiki so far. If you want to roleplay, also drop me a message; I would be totally open to it.

Let's strive to keep this wiki friendly, nice and open. All are welcome.

Always and Forever -- currently in the re-works. I am editing the chapter, re-working my storyline and building my characters. I have been using this site as my source of art and creativity to make it happen, lol. Also, known as "Yuki's Lore" around the wiki.

Growing Up with Red Hair: From Hate to Love

There is more, much more, to being a redhead than the color of one's hair.

The reason I have chosen this quote for my page is simple because of what it means to me.

I did not like my hair when I was younger. At a very young age, my hair was kept long and well-maintained; I enjoyed having my mother do my hair up in a variety of style, whether that be braids or the "Pebbles" hairstyle. I adored them all. That all quickly changed as I started going through elementary school. I started to realized I was usually either the only redhead in my class, or at least one of two. And as the other children also started growing up, they would start to notice the differences amongst one another. I would never like to put myself into a category of extreme bullying due to such a difference as ethnicity or religion; I would, however, put myself into a category where I was made to feel uncomfortable and insecure due to my hair colour, and as I got older and went through puberty, I would later experience what I would come to learn as sexual harassment and comments (though we aren't at that point yet).

I think, in part, a lot of the teasing that followed me around in the classrooms and the hallways--in direct reference to my hair and my "soul"--came from concepts such as "Kick a Ginger" day and the "angry ginger kid" named Michael Kittrel, which in turn, developed from the South Park episode. But me, having not watched these shows, truly did not understand the jokes that were being made against me. With all the teasing and names being hurled at me in reference to my hair, I eventually just came to intensely dislike it. I cut it off and went short with my hairstyle. I felt as though it was probably the only thing I could do in order to reduce the teasing; I would be snappish with others in any degree if they started mentioning my physical features like my hair. I would not let anyone make another comment again me and my hair, especially in relation to my soul, my freckles, my pale, burning skin--none of it. Even the library teacher, who had nicknamed me "Red", was something I found so incredibly annoying.

By the time I had reached high school, I always made sure to keep my hair shoulder-length or less. I tried not to do anything with my hair--if I did, I would feel as though I was drawing attention to its colour. Then, the sexual comments started. Never in my life had I experienced something to this degree. For whatever reason, the colour of my hair was an invitation for men to make sexual comments about my body and what they would want to do with me. Being at the age of fifteen/sixteen, I honestly found it horrifyingly embarrassing to be asked questions like, "Do the carpets match the drapes?" or "Is it true what they say about red heads?" "I'd like you to see what I could do to you... *****" "Bet your hot in bed" "Can I have a peek". Honestly, you reach a point where you just have no idea what to do about all the comments--should you giggle? Just smile awkwardly? Snap back? Or punch them in the face? Me, of course? I would go red in the face--I couldn't help it, I just did it--and I get flustered, embarrassed, and just either try not to say anything, or if I reached my tolerance for the day of comments, "tell me to knock it off."

I can honestly say it was not until I changed high schools and then finally graduated. As I started to discover myself, and research into exactly what red hair is... it only happens in about 1-2% of the population, and people of Northern or Northwestern European have a 4-6% more chance of having it. It is most common in individuals homozygous for a recessive allele on chromosome 16 that produces an altered version of the MC1R protein. The hair colour can come in a range of hues and shades, from deep burgundy or bright copper, or auburn, to burnt orange or red-orange to strawberry blond. With high levels of the reddish pigment pheomelanin and relatively low levels of the dark pigment pheumelanin, most natural redheads will have fair skin color, lighter eye color, freckles, and sensitivity to ultraviolet light. Even more, redheads have a greater ability to produce vitamin D due to our sun sensitivities. There have also been numerous studies conducted that show how people with red hair have different sensitivity levels to pain than people with other hair colours, such as black or brown or dirty blonde. One study found that people with red hair are more sensitive to thermal pain (associated with naturally occurring low vitamin K levels); the second study determined that redheads are less sensitive to pain from multiple modalities, including noxious stimuli such as electrically induced pain. It has also been found that individuals with red hair require greater amounts of anesthetic than others who don't have red hair. In addition, it has also been concluded that women with naturally red hair require less of the painkiller pentazocine than either women of other hair colors or men of any hair color. A study showed women with red hair had a greater analgesic response to that particular pain medication than men. A follow-up study by the same group showed that men and women with red hair had a greater analgesic response to morphine-6-glucuronide.

All those facts, as I learned them, started making me realize what a special and unique individual I was. I had a beautiful, rare hair colour; it came from a result of a weird gene, yes, but it also came with weird, yet oddly amazing things my body could do or react to. As I also started taking more notice of fashion and make-up, I also realized there were so many things I could do with red hair; there were women out there who would love to have the shade of hair colour which I had. Learning about all the individual characteristics attached to me... I slowly started to love my hair again.

At the end of the day, what mattered most was feeling good about myself in any way. I learned to see how the stereotypes, and sexual comments, and the teasing couldn't impact. Because people did truly love my hair--and more importantly, so did I.

Retrieved from "https://thevampirediariesfanon.fandom.com/wiki/User:SaiyukiLover232?oldid=6524"
Community content is available under CC-BY-SA unless otherwise noted.